THE LOST MINE SERIES 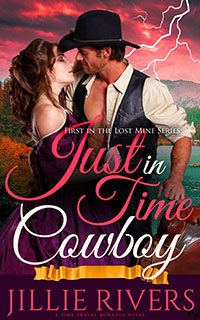 Just in Time Cowboy, first in the Lost Mine Series, is available now at Amazon.com!

When a lightning strike on ancient Sioux holy ground sends mining engineer Kelsey Winter back in time to 1892 Wyoming, she turns to handsome, reckless cowboy Pete Jackson to help her find a way home.

Pete’s happy to help the strange woman in tight denim trousers, despite her odd, cautious ways, when he learns she can assist him with his newly discovered silver mine. But a deadly outlaw wants Pete’s silver, and a Sioux prophecy threatens Kelsey’s return home, and Pete and Kelsey must find a way past their differences, and the century between them, if they, and their growing love, will survive.

Second Time Cowboy, second in the Lost Mine Series, is available now at Amazon.com!

When a lightning strike sends environmental arbitrator Lindsay Five Doves O’Dwyer back in time to 1893 Wyoming, she must enact the ancient myth foretold on the antique Sioux armband she’s wearing if she wants to return home.

But handsome U.S. Marshal Sted Madden believes she’s stolen the powerful, magical armband from the beloved woman he buried nine months ago. Sted threatens revenge, despite the attraction he feels to Lindsay and her uncanny resemblance to the woman he was to marry.

Lindsay blames their mutual attraction on the armband and its need for her to have a mate as part of the myth. But with four days until the date history says a deadly outlaw kills Sted, and with the lives of Lindsay’s family, past, present, and future on the line, Lindsay and Sted must find a way to believe in the myth and each other, if they and their growing love will survive. 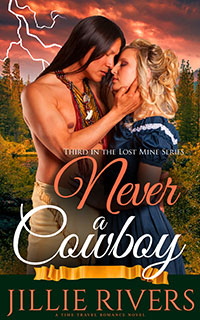 Never a Cowboy, third in the Lost Mine Series, is available now at Amazon.com!

Modern-day historian Dena Larson’s plans to visit a certain Sioux holy man in the nineteenth century go awry when he comes to her time instead on the trail of a rival holy man who threatens to destroy his family.

Powerful and protective, Running Horse finds it hard to resist pretty, persistent Dena. Until a vision shows him her death. To keep her safe, he must reject her love.

But his enemy draws an unwitting Dena into his plot against Running Horse. Dark family secrets are revealed, and soon Dena and Running Horse must find a way to come together before their own histories tear them forever apart.